Like us on Facebook, follow us on Twitter! Check out our new tumblr page. :)
Manga News: Toriko has come to an end; but be sure to swing by and share your favourite moments from the series!
Manhwa & Manhua News: Check out the new Manhwa and Manhua shout-out (March 2016).
Event News: One Piece Awardshas concluded. Check the results Here!
MangaHelpers > Manga > Browse > Aoi no Yuuwaku
Home
Chapters
Translations
RSS 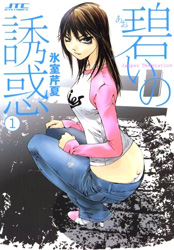 Shinichi, an apprentice photographer, has returned to Japan to live with and learn from a successful photographer who mostly takes pictures of partially nude women. It is here that he's reunited with his childhood friend Azusa, who has become a model! However, Azusa is no longer the sweet little girl he remembers; now she has grown into an angry and sadistic, but sexy, young woman. It's clear there are some kind of sparks between them, but it's often difficult for Shinichi to determine whether she loves him or hates him! With all the other models who keep coming on to Shinichi, will he ever be able to figure out his relationship with Azusa?