Like us on Facebook, follow us on Twitter! Check out our new tumblr page. :)
Manga News: Toriko has come to an end; but be sure to swing by and share your favourite moments from the series!
Manhwa & Manhua News: Check out the new Manhwa and Manhua shout-out (March 2016).
Event News: One Piece Awardshas concluded. Check the results Here!
MangaHelpers > Manga > Browse > Ginga Densetsu Weed
Home
Chapters
Translations
RSS 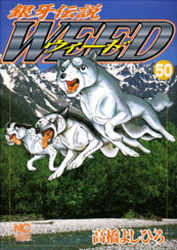 "Weed's a courageous young pup in search of his long-lost father, the legendary boss dog, Gin. When his mother dies, Weed and the cowardly, but kind-hearted GB, set off through the dangerous wilds. Will they reach the Ohu mountains where Gin runs a Dog Utopia?"

This is a manga about dogs and it's the sequel to Ginga Nagareboshi Gin. It contains lots of fighting and blood. There are multiple story arcs (killing P4 the monster, claiming Ohu's Paradise back from Hougen the Great Dane, fighting Shougun the Gelada and his Japanese Macaque army, gaining a victory over the Russian war dog invaders in Hokkaido...) and the feeling to it is kinda "samurai-ish"; honor and loyalty are important themes.

The series are very popular in Scandinavia, people even buy the Japanese mangas even though they don't understand anything.