Like us on Facebook, follow us on Twitter! Check out our new tumblr page. :)
Manga News: Toriko has come to an end; but be sure to swing by and share your favourite moments from the series!
Manhwa & Manhua News: Check out the new Manhwa and Manhua shout-out (March 2016).
Event News: One Piece Awardshas concluded. Check the results Here!
MangaHelpers > Manga > Browse > Graduale Der Wolken
Home
Chapters
Translations
RSS 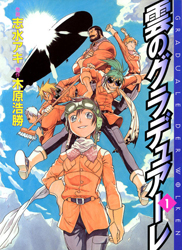 In an age where countries are connected by airship routes, there exists a mysterious, highly skilled band called Zarastro. Using balloons and gliders, this band is known for attacking the air routes between countries. However, no one knows the true identity of this group, or what exactly their goals are! In truth, this small but effective band consists of young combat experts named after musical instruments (Koto, Bell, Cymbal, Cello, and Flute), and their strategic leaders. Koto and her teammates may soon find themselves playing a major role in a conflict which could envelop the entire world!
[tethysdust]