Like us on Facebook, follow us on Twitter! Check out our new tumblr page. :)
Manga News: Toriko has come to an end; but be sure to swing by and share your favourite moments from the series!
Manhwa & Manhua News: Check out the new Manhwa and Manhua shout-out (March 2016).
Event News: One Piece Awardshas concluded. Check the results Here!
MangaHelpers > Manga > Browse > GT-R
Home
Chapters
Translations
RSS 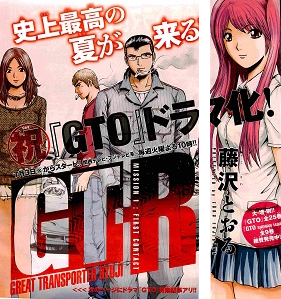 Being one of the few longtime friends with Onizuka (GTO), Danma Ryuji has seen all the fiascoes he has gotten into. But the motorcycle shop owner and self proclaimed fastest driver in the city is about to get into a world of trouble. A hot teenager named Ishikawa Mimon starts taking interest in Ryuji, but contrary to her appearance, she's a dangerous person that will put Ryuji into life threatening situations. Even though he has a beautiful girlfriend named Nagisa, Mimon is about to wreak havoc in Ryuji’s peaceful life. [vyc]