Like us on Facebook, follow us on Twitter! Check out our new tumblr page. :)
Manga News: Toriko has come to an end; but be sure to swing by and share your favourite moments from the series!
Manhwa & Manhua News: Check out the new Manhwa and Manhua shout-out (March 2016).
Event News: One Piece Awardshas concluded. Check the results Here!
MangaHelpers > Manga > Browse > Trigger
Home
Chapters
Translations
RSS 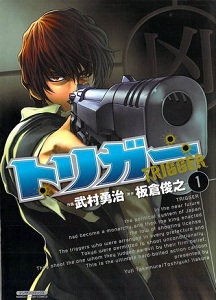 In the near future, Japan has become a monarchy. The current king of Japan has created a shocking new system for decreasing crime. There is a person known as a "Trigger" in each prefecture and Tokyo. These people are allowed to shoot whoever they decide is 'evil,' whether its a violent criminal or someone who reads newspapers annoyingly on a crowded subway car. Mikami Kazuya is the Trigger of Tokyo. He wanders the city, leaving a trail of corpses of 'evildoers' in his wake. He also tries to use his homicide rights to protect his favorite restaurant, where the curry reminds him of a home-cooked meal. However, his efforts may do more harm than good to the poor restaurant. Will the Trigger system really result in a better Japan? [tethysdust]