Like us on Facebook, follow us on Twitter! Check out our new tumblr page. :)
Manga News: Toriko has come to an end; but be sure to swing by and share your favourite moments from the series!
Manhwa & Manhua News: Check out the new Manhwa and Manhua shout-out (March 2016).
Event News: One Piece Awardshas concluded. Check the results Here!
MangaHelpers > Manga > Browse > Harumagedon
Home
Chapters
Translations
RSS 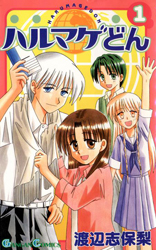 Nostradamus’s prediction that the world would end on July of 1999 never happened. However, the lord of doom, Harumagedon has been on Earth since then and doing a countdown for the end of humanity. Following a point based system, Harumagedon has been taking away points for humanity’s wrong doings and awarding points for each good behavior, with the values determined by the almighty Harumagedon himself. When humanity reaches 0 points, Earth will be destroyed. It has been 19 months since Harumagedon arrived on Earth and the only reason humanity has not been eliminated is because of a girl named Noa. She has shown true purity and goodness of humanity to Harumagedon and every time the points are about to hit 0, Noa touches his heart and saves Earth. Will Earth ever be destroyed or will Noa unwittingly save the entire human race? [vyc]