Like us on Facebook, follow us on Twitter! Check out our new tumblr page. :)
Manga News: Toriko has come to an end; but be sure to swing by and share your favourite moments from the series!
Manhwa & Manhua News: Check out the new Manhwa and Manhua shout-out (March 2016).
Event News: One Piece Awardshas concluded. Check the results Here!
MangaHelpers > Manga > Browse > UFO Princess Valkyrie
Home
Chapters
Translations
RSS 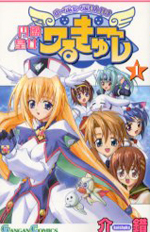 Fleeing in a spaceship from her home planet of Valhalla, Princess Warukyure (Valkyrie) has crash-landed on the unlucky Kazuto and his public bathhouse. In order to save him from death, she has given half of her soul to Kazuto, binding them together irreversibly.

With only half her soul, unless she borrows power from Kazuto, Waru-chan reverts to the form of a child. For Kazuto's part, he's now basically invulnerable, which is a lucky thing considering all of the explosions, death rays, and crashing spaceships that are now a commonplace occurrence. Will Kazuto's bathhouse, friends, and city be able to survive being mixed up in Waru-chan's royal family drama?

Could somebody please translate this into english? Permalink " "