Like us on Facebook, follow us on Twitter! Check out our new tumblr page. :)
Manga News: Toriko has come to an end; but be sure to swing by and share your favourite moments from the series!
Manhwa & Manhua News: Check out the new Manhwa and Manhua shout-out (March 2016).
Event News: One Piece Awardshas concluded. Check the results Here!
MangaHelpers > Manga > Browse > Hibi Kore Haiboku
Home
Chapters
Translations
RSS 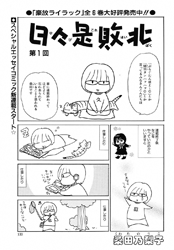 Ever wonder what a life of a mangaka (manga artist) is like?? Wonder no more! Noriko Kuwata (more known to her fans as Kuwa-tan) gives us a peek into the supposedly exciting occupation.

Okay not really. Kuwata-sensei depicts her daily life as full of procrastination, rushing for deadlines, playing with her cat (Nyorori; sort of means "wriggly"), and coping with her paranoia (she thought she needed surgery when she sprained her ankle; wasn't entirely her fault she thought that though). The pessimism and negativity is evened-out with light humor and a fool's optimism, which, sometimes can be a good thing.

"Hibi kore haiboku" loosely translates to "These daily defeats." It's an essay comic (think non-fiction but in manga format). Being a manga, there'll be the occasional exaggerations in expressions (large bulgy eyes, chibis, etc), but on the whole, the story is true (or at least bits of it). Kuwata-sensei also adds to the reading by expressing her mood (in the manga) using kanji (the kanji character changes on her shirt depending on the situation). [6gatsu]