Like us on Facebook, follow us on Twitter! Check out our new tumblr page. :)
Manga News: Toriko has come to an end; but be sure to swing by and share your favourite moments from the series!
Manhwa & Manhua News: Check out the new Manhwa and Manhua shout-out (March 2016).
Event News: One Piece Awardshas concluded. Check the results Here!
MangaHelpers > Manga > Browse > Kuroshitsuji
Home
Chapters
Translations
Thread
RSS 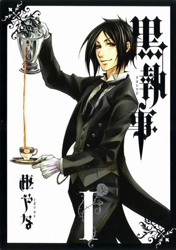 To what extent must a housekeeper do things to be acceptable?

One of the noble families of England: Phantomhive's butler: Sebastian Michaels has got unquestionably perfect knowledge, manners, talent with materials, martial arts, et cetera: but is also able to serve a 12 year old master.
Wearing a grey tailcoat, gracefully brewing the worlds strongest red tea, please read on to see how such a perfect butler copes with such a master...

I'll start this review saying that I love manga dearly and maybe I take them to seriously but I like it this way so deal with it XD The ones I love the most are Naruto, Death Note and Bleach and the new entry has been Kuroshitsuji.

Kuroshitsuji aka Black Butler is something that is likely to be highly appreciated by people who like to "space out" so to say since it brings you back in 1880s with the clothing, behaviouring and stuff but the author mixes these nicely with a good dose of sarcasm and others looks typical of our present time.

The choice of characters is also extremely good to me since they are many and very differing from each other but this many chars shown in quite a short amount of time could make them look superficial but later on we discover more about almost all of them and even the ones who are still "without a past" are fitting perfectly and are great too.

How the story develops could look pretty boring (especially to boys in my opinion) because it takes time before fights or challenges (which are amazing) and spends time talking about such things as cooking and stuff but it's nicely put so it doesn't look out of place.

Then the drawing style is very good in my opinion (other authors of whom I like very much the art are Kishimoto Masashi, Kubo Tite, Obata Takeshi and others like Oh! Great, Arakawa Hiromu, etc.) How Toboso Yana draws is spectacular because of the amount of details and amazing outfits but also the design of the characters is great and their facial expressions variate much (to the content of the readers who always enjoy a peculiar grimace from a usually silent and too much proper character, especially if that's their favourite ^^) and are fitting according to every situation they're put in.

The way they speak can be appreciated especially from those who like old fashioned stuff, or better, who like both the present time's way of speaking (like slang too which we can find in this manga ^^) but enjoy the tradition of the languages. I love it because I'm very focused on languages, at the present time I study four plus Japanese as self-taught.

Well in the end I'd say this is a great manga which mixes a good dose of action and sarcasm to a magnificent and austere society rich of beautiful dresses and habits such as afternoon tea XD It's also drawn finely and narrated fluently with a thrilling plot.

An entertaining and funny manga that quickly turns dark and caters to the drama seekers with high doses of angst and lost. Its hard not to love this series that in the begining caters laughs and in its latest chapters turns up the volume on a dark and disturbing arc that is sure to make you cringe.

One must read and try this series, its addictive and well written not to mention the art is gorgeous. Permalink " "