Like us on Facebook, follow us on Twitter! Check out our new tumblr page. :)
Manga News: Toriko has come to an end; but be sure to swing by and share your favourite moments from the series!
Manhwa & Manhua News: Check out the new Manhwa and Manhua shout-out (March 2016).
Event News: One Piece Awardshas concluded. Check the results Here!
MangaHelpers > Manga > Browse > Hoshi no Joou-sama
Home
Chapters
Translations
RSS 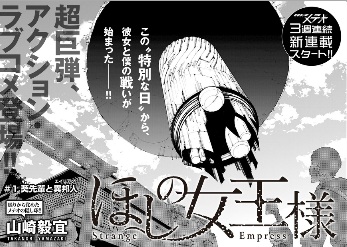 10 years ago, a mushroom-shaped alien spaceship landed on Earth, but the media began to lose interest in it as time went on and nothing exciting happened. Now, a change is coming.

Tetsu is a student at the nearby high school, where he is one of the members of a science club that is in danger of being abolished. The club president, who he likes, is an active girl named Aoi. When an alien creature appears at their school, she convinces the club to sneak in after hours to have a peek at it. After she has a particularly close encounter with the alien, she begins to suffer from fever, memory loss, and the growth of an alien tail. An infectious disease agency comes to take her into custody, and it looks like hers is not the only case... [tethysdust]