Like us on Facebook, follow us on Twitter! Check out our new tumblr page. :)
Manga News: Toriko has come to an end; but be sure to swing by and share your favourite moments from the series!
Manhwa & Manhua News: Check out the new Manhwa and Manhua shout-out (March 2016).
Event News: One Piece Awardshas concluded. Check the results Here!
MangaHelpers > Manga > Browse > Kami-sama ni Rocket Punch!!
Home
Chapters
Translations
RSS 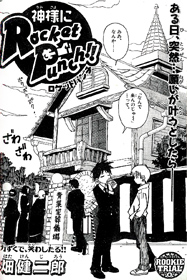 Tasuke's weird old grandpa has passed away at the age of 80, although it was said he would live till 130. Tasuke and his friend Kazuya decided to sneak into his house and they discovered that he had made a deal with a goddess! In exchange for 50 years of his life, he was to be granted a single wish... but the wish came too late. The goddess agreed to just grant his wish to Tasuke instead. Now Tasuke has a right arm that can perform a Rocket Punch! Will Kazuya and the goddess be able to convince him to use his new power as an ally of justice? [tethysdust]