Like us on Facebook, follow us on Twitter! Check out our new tumblr page. :)
Manga News: Toriko has come to an end; but be sure to swing by and share your favourite moments from the series!
Manhwa & Manhua News: Check out the new Manhwa and Manhua shout-out (March 2016).
Event News: One Piece Awardshas concluded. Check the results Here!
MangaHelpers > Manga > Browse > Eighth
Home
Chapters
Translations
RSS 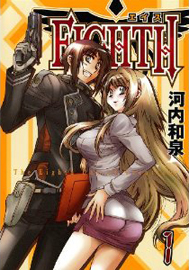 Eighth Research is a large biotech company based on advanced research and development of DNA manipulation. Naoya Graphico is on the security team for the company run by his uncle. Naoya has been acknowledged for his high combat skills and is sent on top secret missions regarding Eigth Research’s interests.

His most recent task has Naoya infiltrating a rival company where a mysterious girl named Celcia has been kidnapped. Naoya’s passion for protecting the weak always helps him accomplish missions; he just needs to make sure his libido doesn’t get in the way. [vyc]