Like us on Facebook, follow us on Twitter! Check out our new tumblr page. :)
Manga News: Toriko has come to an end; but be sure to swing by and share your favourite moments from the series!
Manhwa & Manhua News: Check out the new Manhwa and Manhua shout-out (March 2016).
Event News: One Piece Awardshas concluded. Check the results Here!
MangaHelpers > Manga > Browse > Kyojin no Hoshi
Home
Chapters
Translations
RSS 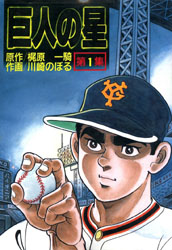 Hyuma Hoshi, a promising young baseball pitcher, dreams of becoming a top star like his father Ittetsu Hoshi in the professional Japanese league. His father was once a third baseman until he was injured in World War II and was forced to retire. Hoshi joins the ever popular Giants team, and soon realizes the difficulty of managing high expectations. From the grueling training to battling the rival Mitsuru Hanagata on the Hanshin Tigers team, he would have to take out his best pitching magic to step up to the challenge.

Kyojin no Hoshi is at first glance a baseball manga, but on a deeper level, it's a story about the bonds between a father and son, and a story that now, over 40 years later, can be viewed critically as a portrait of Japanese social views and philosophies during the 60s and post-war period. The dramatic emphasis on the pride of a man, the supporting nature of the female characters, and the die-hard kamikaze nature of the boys striving to achieve their goals all makes for a heartwrenching manga that will never be forgotten.