Like us on Facebook, follow us on Twitter! Check out our new tumblr page. :)
Manga News: Toriko has come to an end; but be sure to swing by and share your favourite moments from the series!
Manhwa & Manhua News: Check out the new Manhwa and Manhua shout-out (March 2016).
Event News: One Piece Awardshas concluded. Check the results Here!
MangaHelpers > Manga > Browse > Nikoben!
Home
Chapters
Translations
RSS 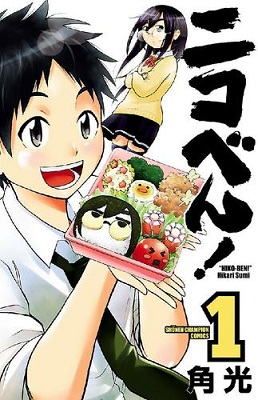 Norimichi is in his first year in high school, and his daily life is full of being bullied. However, there is one thing in his life that he enjoys--spending his evenings making elaborate lunch boxes. The only one in his family who needs a lunch box is his father, though. One day, his father finally refuses his decorative lunch; he says that it's embarrassing to have such a cute lunch made by his son, and he thinks Norimichi needs to learn to stop doing 'girly' stuff like that.

Norimichi is devastated that his one happiness has been taken away, but the events of the day lead to him giving his rejected lunchbox to an unsociable girl at school, Umemiya. She is delighted by his adorable lunch box, and he is thrilled to be able to make her smile. Now he has an exciting new target for his creative lunchboxes, and maybe this first step can lead to something more! [tethysdust]