Like us on Facebook, follow us on Twitter! Check out our new tumblr page. :)
Manga News: Toriko has come to an end; but be sure to swing by and share your favourite moments from the series!
Manhwa & Manhua News: Check out the new Manhwa and Manhua shout-out (March 2016).
Event News: One Piece Awardshas concluded. Check the results Here!
MangaHelpers > Manga > Browse > Parabellum
Home
Chapters
Translations
RSS 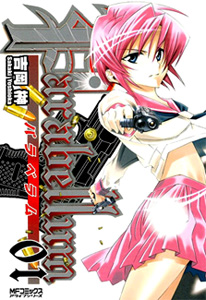 On the very first day that Kuze Aoi transferred to Hinomiya Academy, he finds himself facing down the barrel of a gun. He is introduced to the campus and the student body by his childhood friend Miyabi and learns about the prince and princess among students, Shitara Sagiri and Hinomiya Kuon. Sagiri is a cool and beautiful while Kuon is elegant and magnificent. After school, Aoi gets lost on campus and Kuon begins shooting at him and he's barely saved by a random girl named Atarashi Sonoko. It seems that Aoi holds a secret that is critical in a feud between two old, powerful families. [vyc]