Like us on Facebook, follow us on Twitter! Check out our new tumblr page. :)
Manga News: Toriko has come to an end; but be sure to swing by and share your favourite moments from the series!
Manhwa & Manhua News: Check out the new Manhwa and Manhua shout-out (March 2016).
Event News: One Piece Awardshas concluded. Check the results Here!
MangaHelpers > Manga > Browse > Saihate no Diasuta
Home
Chapters
Translations
RSS 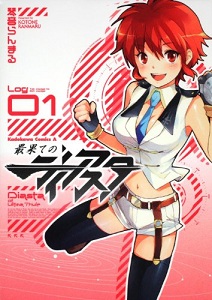 In the far future, there exists a vast region of space that is yet to be explored called the New Space. The levels of new discoveries and dangers are unknown. The Dian sisters, Reina and Rio, made a promise to each other that they will one day journey into New Space together. The two sisters were separated and Reina became a pilot of the commercial luxury cruise liner spaceship Folshion. Rio is a tomboy who seems to have no self consciousness that she is a girl and who finally finds her sister. Rio is allowed to stay on the Folshion granted she finds herself a role on the ship. Sisters united once again, begin dreaming about the adventure into the new territory. [vyc]