Like us on Facebook, follow us on Twitter! Check out our new tumblr page. :)
Manga News: Toriko has come to an end; but be sure to swing by and share your favourite moments from the series!
Manhwa & Manhua News: Check out the new Manhwa and Manhua shout-out (March 2016).
Event News: One Piece Awardshas concluded. Check the results Here!
MangaHelpers > Manga > Browse > Sakana no Miru Yume
Home
Chapters
Translations
RSS 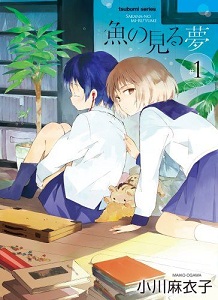 Since their mother's death, sisters Tomoe and Mikage have been mostly raising each other. The older sister, Tomoe, is determined to get good grades and work her way into a good college. However, she's disturbed by the trouble Mikage sometimes gives her. For instance, at the beginning of the manga, Mikage sneakily locks a collar around her older sister's neck, forcing her to go through the day wearing it. Mikage wants Tomoe to think only of her, and her affection may be beyond sisterly love. However, at school, Mikage has made a new female 'friend' that has a serious crush on her. The two sisters have their separate lives at their respective schools, but their life together and their relationship may be most important of all. [tethysdust]