Like us on Facebook, follow us on Twitter! Check out our new tumblr page. :)
Manga News: Toriko has come to an end; but be sure to swing by and share your favourite moments from the series!
Manhwa & Manhua News: Check out the new Manhwa and Manhua shout-out (March 2016).
Event News: One Piece Awardshas concluded. Check the results Here!
MangaHelpers > Manga > Browse > Raikonen no Nettaigyo
Home
Chapters
Translations
RSS 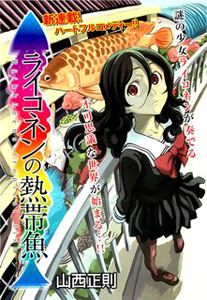 Sekohara finds himself joining the Tropical Fish Club at school, which at this point, only has the founder as its only member, a mysterious girl named Raikonen. She is a self proclaimed witch, but Sekohara doesn’t believe in the nonsense until she is able to turn an angelfish into a human girl with the use of her homunculus alchemy. Raikonen’s goal is to see what happens when a human mates with the transformed fish, but the more time Sekohara spends with Raikonen, the deeper the emotions get. More and more people close to him get involved in the magical experiment she is conducting. [vyc]