Like us on Facebook, follow us on Twitter! Check out our new tumblr page. :)
Manga News: Toriko has come to an end; but be sure to swing by and share your favourite moments from the series!
Manhwa & Manhua News: Check out the new Manhwa and Manhua shout-out (March 2016).
Event News: One Piece Awardshas concluded. Check the results Here!
MangaHelpers > Manga > Browse > Street Fighter ZERO
Home
Chapters
Translations
RSS 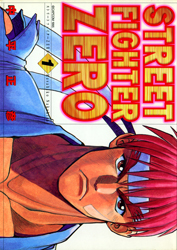 Explores the history of Ryu, one of the primary protagonists of Capcom's Street Fighter series.

OK! first of all i wanna get down to saying, that this is one of the best Street fighter adaptation (video game adaptation in general) i have ever had the pleasure of reading.

the story is really basic its mostly about Ryu (the main character) finding his way in the world learning how to control his power the ''satsui no hado'' which he carries like a cancer.

he basically travels around and meets other ''street fighters'' along the way. he meets up with many popular characters from the video game series (mostly from the ZERO series of STREET FIGHTER), just to mention a few:

Bison (main villain near the end)

and many other characters can be seen.

there are some rather dramatic points in the manga but i'll let you read them.

NOW FOR THE ART WORK!

the art work is great, i personally aprove of the youthful look each character has.

although it could use abit of improvement.

all together its a great manga to look into if your a fan of the series.

i read it simply because i love the series and my fav character (CHARLIE NASH) had a great role for it.

well hope you read it.