Like us on Facebook, follow us on Twitter! Check out our new tumblr page. :)
Manga News: Toriko has come to an end; but be sure to swing by and share your favourite moments from the series!
Manhwa & Manhua News: Check out the new Manhwa and Manhua shout-out (March 2016).
Event News: One Piece Awardshas concluded. Check the results Here!
MangaHelpers > Manga > Browse > Taiyou no Ie
Home
Chapters
Translations
Thread
RSS 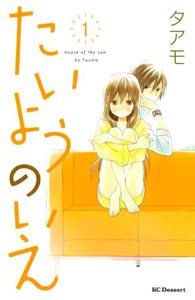 When Mao was young, she was often left home alone while her parents worked long hours at work. She wandered over to the Nakamura home, where a family lived with three children, and found herself accepted into their lively household. One day, she learned that her parents were going to divorce. She chose to live with her nearby father, who she didn't really know very well. After that, the parents of the Nakamura household died in an accident. The eldest child, Hiro, remained in their family home, but his younger siblings were sent away to other relatives.

Years later, when Mao is 17 and Hiro is 23, Mao's father remarries a woman who had a child from a previous marriage. Mao feels as if she's lost the place she once belonged to, and so she accepts Hiro's offer to let her move in with him, into the home where they'd both had so many happy memories. Will they renew the sibling-closeness they shared as children, or will their relationship grow into something more? [tethysdust]