Like us on Facebook, follow us on Twitter! Check out our new tumblr page. :)
Manga News: Toriko has come to an end; but be sure to swing by and share your favourite moments from the series!
Manhwa & Manhua News: Check out the new Manhwa and Manhua shout-out (March 2016).
Event News: One Piece Awardshas concluded. Check the results Here!
MangaHelpers > Manga > Browse > Tsukumono
Home
Chapters
Translations
RSS 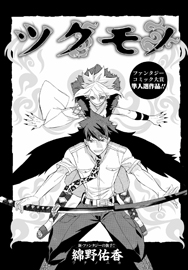 Tsukumo are spirits that appear in objects that have been used for generations and are normally invisible to regular people. Inadoumaru Takayuki recently inherited his grandfather’s store after he passed away. His grandfather was the original owner of the store, which houses countless amounts of things with Tsukumo and he had the ability to see, touch and control the Tsukumo. The same talent has been passed down to Takayuki, but most of the spirits have not accepted him including Muramasa, the famous katana. Will Takayuki be able to keep his promise to his grandfather to take care of the Tsukumo? [vyc]