Like us on Facebook, follow us on Twitter! Check out our new tumblr page. :)
Manga News: Toriko has come to an end; but be sure to swing by and share your favourite moments from the series!
Manhwa & Manhua News: Check out the new Manhwa and Manhua shout-out (March 2016).
Event News: One Piece Awardshas concluded. Check the results Here!
MangaHelpers > Manga > Browse > Vampire Princess Yui
Home
Chapters
Translations
RSS 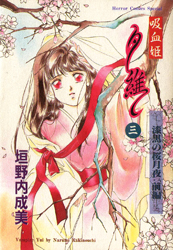 Vampire Yui is the daughter of a male Shinma (the daemons from the Vampire Miyu series) and a woman who has both the blood of the Shi clan (another type of supernatural people vaguely reminiscent of Shinma) and the blood of a vampire, namely Vampire Miyu. The latter had given some of her own blood to Yui's mother, so that Miyu is Yui's mother, older sister and part of her all at once. Yui's particular Shi heritage makes her deeply connected to a magical lake residing on a different plane of existence. The guardian of the lake, Yuki, is the sister of one of Yui's distant ancestresses. Yuki fell in love with a mortal man over a century ago and chose to enter a wakeless sleep with him rather than fulfill her obligation to control the magic of the lake. The remaining Shi covet the lake and want to use its power. They fear that Yui, naturally drawn to it, would wake up Yuki, who would once more take up rule.