Like us on Facebook, follow us on Twitter! Check out our new tumblr page. :)
Manga News: Toriko has come to an end; but be sure to swing by and share your favourite moments from the series!
Manhwa & Manhua News: Check out the new Manhwa and Manhua shout-out (March 2016).
Event News: One Piece Awardshas concluded. Check the results Here!
MangaHelpers > Manga > Browse > 100 Oku no Otoko
Home
Chapters
Translations
RSS 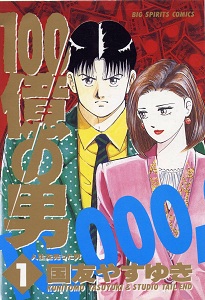 How much is a human life worth? For Tomizawa Takuya, a young white collar worker who was soon to be married, it was a thought that never crossed his mind. He signed his name as his mother’s beneficiary for what he thought was the loan to her restaurant but soon learns that she was investing in the stock market. The financial bubble burst and the 100 million that she borrowed was all gone. The loan originated from Kugayama Tenzen, an incredibly wealthy and successful businessman who owns almost all of the major companies in the city and since his mother has disappeared, Tenzen has come after Takuya.

Even after Tenzen literally takes everything from him including the clothes he was wearing, Takuya hasn’t even made a dent in the loan. Coming to a conclusion that it’s not an amount that could be paid off with a job like his, he decides to sell himself to Tenzen for 100 million. He basically becomes his personal slave and is under the complete mercy of Tenzen. Takuya learns what it means to sell your soul to the devil. [vyc]