Like us on Facebook, follow us on Twitter! Check out our new tumblr page. :)
Manga News: Toriko has come to an end; but be sure to swing by and share your favourite moments from the series!
Manhwa & Manhua News: Check out the new Manhwa and Manhua shout-out (March 2016).
Event News: One Piece Awardshas concluded. Check the results Here!
MangaHelpers > Manga > Browse > 17sai. Joshikousei Kankin Satsujin
Home
Chapters
Translations
RSS 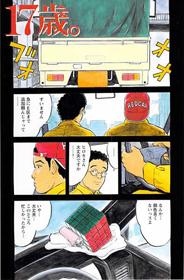 This is the story of a terrible crime committed against a 17-old-girl, committed, in part, by 17-year-old boys. Why did such a thing happen? Why was no one able to prevent it?

In the beginning, high school boys Hiroki and his friend Takashi are rescued from bullying by a notorious gangster, Miyamoto. At first, they are thrilled to be under his protection, and cheerfully run off anyone who threatens them with the mere mention of Miyamoto's name. Soon, they learn that there is a lot more to being in Miyamoto's gang than just being protected. In return, they're expected to offer loyalty and obedience, or face possibly deadly consequences. This becomes harder as the violence and the crimes they find themselves committing begins to escalate.

One night, they kidnap a high school girl, Sachiko. Now Hiroki has two battles to face. Internally, he faces the dissonance between his sense of self-preservation and his conscience. Externally, Sachiko's twin sister Miki, who goes to Hiroki's high school, her parents and the police are searching for the missing girl. Will Sachiko ever return home? What kind of person--or monster--will Hiroki become? [tethysdust]