Like us on Facebook, follow us on Twitter! Check out our new tumblr page. :)
Manga News: Toriko has come to an end; but be sure to swing by and share your favourite moments from the series!
Manhwa & Manhua News: Check out the new Manhwa and Manhua shout-out (March 2016).
Event News: One Piece Awardshas concluded. Check the results Here!
MangaHelpers > Manga > Browse > 2 x Bone
Home
Chapters
Translations
RSS 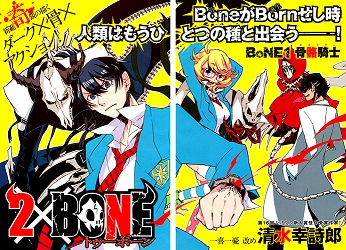 Natural selection has created a deadly new species known as "Eclipse," who are driven to eliminate humanity. A scientist called Kurusu Kenji headed an organization whose purpose was to fight these deadly creatures of bone. To this end, he created the "Osteon," Eclipse-like creatures that obey the commands of the human from whose DNA they are created. Now Kenji is gone, and his assistant Kidogawa Rokuko is attempting to recruit his estranged teenage son. Kurusu Akira wanted nothing to do with the father that he believed abandoned him, but attacks from Eclipse force him to accept his own Osteon from Rokuko. He slowly finds himself drawn into the organization, whose members expect him to take his father's place. Akira and his Osteon may have little interest in protecting humanity, but they are determined not to be beaten! [tethysdust]