Like us on Facebook, follow us on Twitter! Check out our new tumblr page. :)
Manga News: Toriko has come to an end; but be sure to swing by and share your favourite moments from the series!
Manhwa & Manhua News: Check out the new Manhwa and Manhua shout-out (March 2016).
Event News: One Piece Awardshas concluded. Check the results Here!
MangaHelpers > Manga > Browse > After Recording
Home
Chapters
Translations
RSS 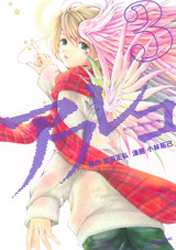 Nobuto is a man obsessed with detecting radio waves from aliens, and his girlfriend Ako is chasing her dream to become a seiyuu (voice actress). Frightened that his existence will damage her career, he breaks up with her. Shortly thereafter, Ako dies in what appears to be a tragic accident, just as Nobuto's observatory picks up a possible extra-terrestrial signal. As Nobuto tries to handle his grief, another seiyuu appears, one who strangely has a voice identical to Ako's. What is this girl and could she have some connection to Ako's death? [tethysdust]