Like us on Facebook, follow us on Twitter! Check out our new tumblr page. :)
Manga News: Toriko has come to an end; but be sure to swing by and share your favourite moments from the series!
Manhwa & Manhua News: Check out the new Manhwa and Manhua shout-out (March 2016).
Event News: One Piece Awardshas concluded. Check the results Here!
MangaHelpers > Manga > Browse > Agunesu Kamen
Home
Chapters
Translations
RSS 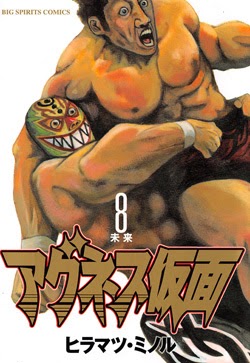 Professional wrestler Yamamoto Jingo just returned to Japan from a 5 year training trip in the US and Mexico, only to be greeted by his now defunct wrestling company: Yamato. He's come to find out that as soon as the president of the company passed away, the rival wrestling group "Teijitsu" took down Yamato. Jingo has now been forced to go seek revenge for the destruction of Yamato by challenging the Teijitsu president. One thing led to another, and now Jingo has been half-forced into working under Teijitsu as the new wrestler from Brazil: Agnes Kamen. [DrCoke]