Like us on Facebook, follow us on Twitter! Check out our new tumblr page. :)
Manga News: Toriko has come to an end; but be sure to swing by and share your favourite moments from the series!
Manhwa & Manhua News: Check out the new Manhwa and Manhua shout-out (March 2016).
Event News: One Piece Awardshas concluded. Check the results Here!
MangaHelpers > Manga > Browse > Air-Kare
Home
Chapters
Translations
RSS 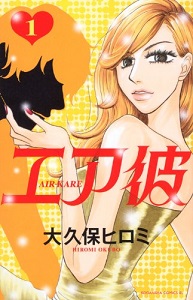 Ria is a pretty, young woman who works in a small corner of Osaka, delivering lunches to the elderly. She doesn't deal well with young men, so she has created an "air boyfriend," who she imagines is always loving and supportive of her. Ria is approaching 30 without having ever really dated. One day, the little food delivery business is bought out by a Tokyo company. Ria and her chubby friend Kyou end up heading to Tokyo to work, sadly leaving behind the older workers.

Mistakes and misunderstandings crop up in every department Ria tries to work in (many due to the fact that people assume she speaks English, based on her half-Japanese looks), and she is despondent that she is failing to represent the people she left behind in Osaka. Finally, Ria ends up as a secretary. When she ends up in a meeting about food delivery to the elderly, she feels compelled to speak up about her own experiences. She is certain she's about to be fired, but instead, she is promoted to be the young company president's personal secretary. Ria is not sure of her job as a secretary, she doesn't seem able to make friends at work, and she has no idea how to deal with the gorgeous man that is now her direct boss! [tethysdust]