Like us on Facebook, follow us on Twitter! Check out our new tumblr page. :)
Manga News: Toriko has come to an end; but be sure to swing by and share your favourite moments from the series!
Manhwa & Manhua News: Check out the new Manhwa and Manhua shout-out (March 2016).
Event News: One Piece Awardshas concluded. Check the results Here!
MangaHelpers > Manga > Browse > Aku no Meshitsukai
Home
Chapters
Translations
RSS 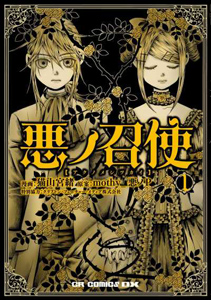 In a certain kingdom, a prophecy was made about a child born with a birthmark on his back. It was said that he would bring an end to the kingdom, and that his death would bring about its destruction. When the twin prince and princess were born, Len and Rin, Len was discovered to have the birthmark. He was banished to a lonely tower, and Rin was raised as the only princess. However, it ended up being impossible to keep the siblings apart, and soon they formed a deep friendship. Although circumstances may pull them apart, nothing can break the bond they have with each other. They struggle together to survive the treacherous and dangerous world they were born into. [tethysdust]