Like us on Facebook, follow us on Twitter! Check out our new tumblr page. :)
Manga News: Toriko has come to an end; but be sure to swing by and share your favourite moments from the series!
Manhwa & Manhua News: Check out the new Manhwa and Manhua shout-out (March 2016).
Event News: One Piece Awardshas concluded. Check the results Here!
MangaHelpers > Manga > Browse > Alien 9
Home
Chapters
Translations
RSS 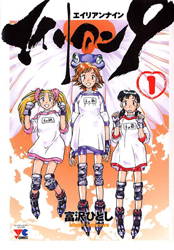 Yuri Otani, a rather melancholic 12-year-old, has just arrived in sixth grade and has (begrudgingly) joined the "Alien Party", a team whose primary objective is to capture any otherworldly aliens that may appear on campus. To make matters even worse for Yuri, the only way that capturing the aliens can be made possible is to adjoin with a "Borg", a symbiotic life-form whose sole purpose is to protect their host, incapacitate, and ultimately capture other aliens, using anything available to their arsenal (which includes, but is not limited to: Borgs, inline roller blades, knee pads, and lacrosse sticks.) Yuri is not alone in her tribulations, for she has two other Alien Party member friends - Kasumi and Kumi.