Like us on Facebook, follow us on Twitter! Check out our new tumblr page. :)
Manga News: Toriko has come to an end; but be sure to swing by and share your favourite moments from the series!
Manhwa & Manhua News: Check out the new Manhwa and Manhua shout-out (March 2016).
Event News: One Piece Awardshas concluded. Check the results Here!
MangaHelpers > Manga > Browse > Amai Yokubou
Home
Chapters
Translations
RSS 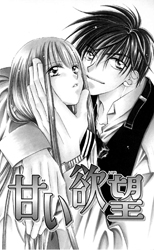 After being dumped, Maya is accused by men as being cold and frigid. An encounter with a stranger leaves her thinking differently, but somehow this stranger knows her name. [From RebelliousArt]

Note:
The one-shot was firstly published in Sho-comi magazine. It was compiled together with the other six one-shots and released as a tankobon titled 17-sai Hajimete no H (17歳初めてのＨ) in 1999. In 2002, Amai Yokubou was also included in volume 5 of a main series of the mangaka, Ga.ma.n Dekinai (ガ・マ・ンできない).