Like us on Facebook, follow us on Twitter! Check out our new tumblr page. :)
Manga News: Toriko has come to an end; but be sure to swing by and share your favourite moments from the series!
Manhwa & Manhua News: Check out the new Manhwa and Manhua shout-out (March 2016).
Event News: One Piece Awardshas concluded. Check the results Here!
MangaHelpers > Manga > Browse > Angel Koukou
Home
Chapters
Translations
RSS 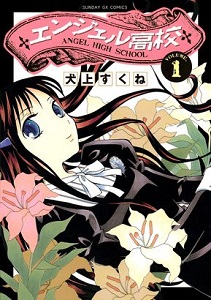 On one normal day while leaving school, Lukio dies from a car accident. Next thing he knows, he's being transported to a school called "Angel High School," where future Archangels study. With no other choice (being that he's actually dead), he now has to study to become a full Archangel, but somehow he becomes involved in the school's rivalry against the "Fallen Angel School." Now he must study with his fellow apprentice angels and compete against the fallen angel students. [DrCoke]