Like us on Facebook, follow us on Twitter! Check out our new tumblr page. :)
Manga News: Toriko has come to an end; but be sure to swing by and share your favourite moments from the series!
Manhwa & Manhua News: Check out the new Manhwa and Manhua shout-out (March 2016).
Event News: One Piece Awardshas concluded. Check the results Here!
MangaHelpers > Manga > Browse > Angel Voice
Home
Chapters
Translations
Thread
RSS 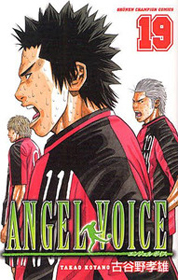 This school is known for its football club Ranzan, a refuge from the head of the largest departments. To avoid disbanding the club, the manager using the new football coach: Tetsuo Kuroki. He will choose to form teams with the strongest students. And indeed, four of them come to integrate the school. Among them Shingo Narita, a student is turbulent but not a bad person who does not hesitate to fight to defend his colleagues. When he proposed to join the club soccer, a sport he practiced a few years ago, his enthusiasm took over. Through sport, Professor Kuroki will teach them that there are other solutions that come from a single blow.