Like us on Facebook, follow us on Twitter! Check out our new tumblr page. :)
Manga News: Toriko has come to an end; but be sure to swing by and share your favourite moments from the series!
Manhwa & Manhua News: Check out the new Manhwa and Manhua shout-out (March 2016).
Event News: One Piece Awardshas concluded. Check the results Here!
MangaHelpers > Manga > Browse > Anta nante okotowari
Home
Chapters
Translations
RSS 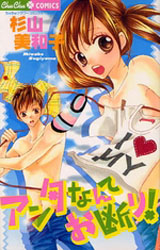 Yui has a deep love for her "older brother" (they're not actually siblings, but are related), and she is devastated when he gets married. While at the wedding, Yui meets a sobbing boy, Kaoru. It turns out that his cousin (that he was in love with) is the one Yui's brother is marrying.

When Yui moves into a boy's dorm so she can seek out new love, she finds that the head of the dorm is none other than Kaoru!