Like us on Facebook, follow us on Twitter! Check out our new tumblr page. :)
Manga News: Toriko has come to an end; but be sure to swing by and share your favourite moments from the series!
Manhwa & Manhua News: Check out the new Manhwa and Manhua shout-out (March 2016).
Event News: One Piece Awardshas concluded. Check the results Here!
MangaHelpers > Manga > Browse > Aoi Destruction
Home
Chapters
Translations
RSS 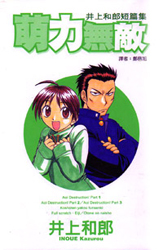 Aoi Destruction is a compilation of short stories by Kazurou Inoue (Midori no Hibi and Aikora).

The first 3 chapters are dedicated to the title story (Aoi Destruction).

Story 2 is 'Rare Bookshop Owner Yakou's Hard-Fighting Chronicles'. Yakou was left to run his father's rare book store and bitterly resents it. Then a super-hot babe walks into his store. She's a "book-detective" and tells him she's taking over the store so Yakou can pursue his family's heritage--the "other job...".

Story 3 is 'Full Scratch Eiji,' about a boy who tries to get away from his otaku past. He was a legend among figure makers, "E-Model-san," until a girl rejected him for being too "otaku." Yoshizaka is easily the big man on campus; adoring girls throng about him. Jealous boys chew their livers. Then he stops to help a goofy girl--who is thrilled to meet "E-Model-san"! She could ruin everything; he has to shut her up!

Story 4 is 'Otone no Naisho,' a story about a young samurai girl who finds herself the owner of a perverted possessed katana.