Like us on Facebook, follow us on Twitter! Check out our new tumblr page. :)
Manga News: Toriko has come to an end; but be sure to swing by and share your favourite moments from the series!
Manhwa & Manhua News: Check out the new Manhwa and Manhua shout-out (March 2016).
Event News: One Piece Awardshas concluded. Check the results Here!
MangaHelpers > Manga > Browse > Aoi Honoo
Home
Chapters
Translations
RSS 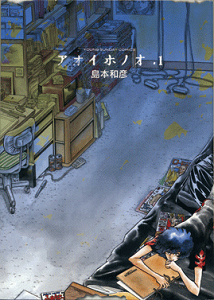 This is a story set in the 1980s, when the anime and manga industries were on the edge of great future developments. 18-year-old Honoo Moyuru is a student at a fictionalized version of the Osaka University of the Arts, where he bumps into various other students who will become great in these industries (such as the animator Hideaki Anno, of Evangelion). Honoo is determined to make it big as a manga writer, and his friend, a cute girl named Tonko, is supporting him all the way. He plans for his future career as he attends a school overflowing with creative genius! But does he have the skill to make his burning ambition a reality? [tethysdust]