Like us on Facebook, follow us on Twitter! Check out our new tumblr page. :)
Manga News: Toriko has come to an end; but be sure to swing by and share your favourite moments from the series!
Manhwa & Manhua News: Check out the new Manhwa and Manhua shout-out (March 2016).
Event News: One Piece Awardshas concluded. Check the results Here!
MangaHelpers > Manga > Browse > April 1st
Home
Chapters
Translations
RSS 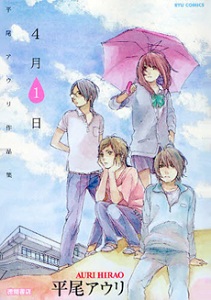 A collection of short stories:

1) Kami to Onna: Sumitarou adores women's hair, but he's terrified of women themselves. He wants to become a hairdresser, but will his anxiety around women ruin his possibility of achieving his dream?

2) Hoshiirono: It looks like Junta's going to be late for school one day, when he sees a cute fellow classmate named Lili, who he knew as a young child. She claims she can use magic, and she 'proves' it in various ways throughout the day. Is Lili's magic real?

3) Onaji Sakura wa Kotoshi no Saigo: Nozomu and Yuuto have been friends and classmates since elementary school. Yuuto always thinks of Nozomu as his little brother, and affectionately calls him "cute" all the time. Nozomu doesn't like being treated like a child... Will this destroy their relationship?

4) April 1st: A group of students feel dissatisfied with their lives, for various reasons. Will starting a dodgeball club together be a solution? [tethysdust]