Like us on Facebook, follow us on Twitter! Check out our new tumblr page. :)
Manga News: Toriko has come to an end; but be sure to swing by and share your favourite moments from the series!
Manhwa & Manhua News: Check out the new Manhwa and Manhua shout-out (March 2016).
Event News: One Piece Awardshas concluded. Check the results Here!
MangaHelpers > Manga > Browse > Aquarion Evol
Home
Chapters
Translations
RSS 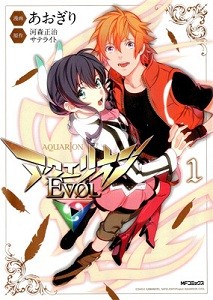 Set 12,000 years after "Genesis of Aquarion," Aquarion Evol features the planet Vega, which is plagued by mecha who are called "Abductors," who are kidnapping women. An organization called Neo-DEAVA trains 'Elements,' people who have the special ability to pilot the mecha called "Aquaria." The Elements are composed of two teams--male and female--who are kept carefully separate.

The story features Amata Sora, a young man who keeps his ability to fly a secret. One day, he meets and befriends Mikono Suzushiro, an ordinary young woman. When Abductors attack the city, Amata finds himself having to use his special ability to protect Mikono. When he does so, he recreates the giant robot "Aquarion," combining the male and female teams into one in a forbidden union. Now that Amata's ability is revealed, he will have to work with Neo-DEAVA to protect Vega from the Abductors. [tethysdust]