Like us on Facebook, follow us on Twitter! Check out our new tumblr page. :)
Manga News: Toriko has come to an end; but be sure to swing by and share your favourite moments from the series!
Manhwa & Manhua News: Check out the new Manhwa and Manhua shout-out (March 2016).
Event News: One Piece Awardshas concluded. Check the results Here!
MangaHelpers > Manga > Browse > Arashi wo Yobu Otoko
Home
Chapters
Translations
RSS 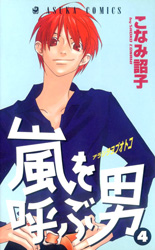 Arashi is a 14-year-old boy living in poverty with his Dad, younger sister, and baby brother. His dad is a good person at heart, but is constantly being taken advantage of. He even let a stranger use his name to take out a loan! However, one day, two loan sharks raid the apartment that they live in to collect the money owed. While Arashi and the loan sharks' argument progresses and is slowly becoming a fist fight, a mysterious guy named Archbolt. G. Stevens appears and fights and defeats the loan sharks. Arashi makes a shocking discovery: He was adopted and he's the grandson of the leader of the Sawanomori Group and Archbolt has come to pick him up! Who exactly is Archbolt and how will this news affect Arashi's life as apparently he has suddenly become extremely wealthy. [Kohakuboshi]