Like us on Facebook, follow us on Twitter! Check out our new tumblr page. :)
Manga News: Toriko has come to an end; but be sure to swing by and share your favourite moments from the series!
Manhwa & Manhua News: Check out the new Manhwa and Manhua shout-out (March 2016).
Event News: One Piece Awardshas concluded. Check the results Here!
MangaHelpers > Manga > Browse > Jojo's Bizarre Adventure
Home
Chapters
Translations
Thread
RSS 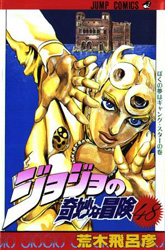 An epic horror-action-adventure! Once there was a mighty bloodline of heroes: the Joestars. In the 1880s, Englishman Jonathan Joestar gave his life to defeat Dio, a megalomaniacal vampire. Now, 100 years later, Dio is back, and Jonathan's descendants must travel to Egypt to destroy their ancestral enemy once and for all. On one side: Joseph Joestar and Jotaro Kujo ("JoJo" for short)...a globetrotting martial artist and his delinquent Japanese-English grandson. On the other side: a vampire and an army of murderers possessed by evil spirits, the monstrous "Stands". But Jotaro and Joseph have "Stands" too...and the stage is set for a terrifying battle as the heroes fight their way around the world! Adapted into anime, action figures and video games, JoJo's Bizarre Adventure is one of the weirdest, most influential Jump manga ever!