Like us on Facebook, follow us on Twitter! Check out our new tumblr page. :)
Manga News: Toriko has come to an end; but be sure to swing by and share your favourite moments from the series!
Manhwa & Manhua News: Check out the new Manhwa and Manhua shout-out (March 2016).
Event News: One Piece Awardshas concluded. Check the results Here!
MangaHelpers > Manga > Browse > di(e)ce
Home
Chapters
Translations
RSS 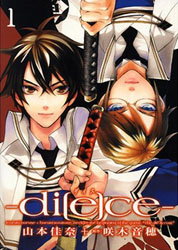 Naruse Kazuki and Koutake Haruki are on the advanced track of Seitoukou Academy. Though they are not connected by blood, these two whose faces are so similar coincidentally have their 16th birthdays on November 11th. However, on that fateful anniversary, the cogs of fate have begun to turn. A game involving both their destinies has now begun! (From Entropy)