Like us on Facebook, follow us on Twitter! Check out our new tumblr page. :)
Manga News: Toriko has come to an end; but be sure to swing by and share your favourite moments from the series!
Manhwa & Manhua News: Check out the new Manhwa and Manhua shout-out (March 2016).
Event News: One Piece Awardshas concluded. Check the results Here!
MangaHelpers > Manga > Browse > Arata no Tsukumogami
Home
Chapters
Translations
RSS 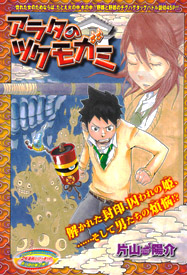 In the hopes of pleasing his childhood friend and crush, Chiharu, Arata agreed to help her clean out an old warehouse from her grandfather. But what neither of them knew was that the warehouse contained "tsukumogami" ancient objects imbued with life. When Arata accidentally broke the seal on a box containing an artifact that hungered for vengeance against humanity, Chiharu was kidnapped! Now it is up to Arata and the good, loyal artifacts to rescue Chiharu before it is too late!
[tethysdust]