Like us on Facebook, follow us on Twitter! Check out our new tumblr page. :)
Manga News: Toriko has come to an end; but be sure to swing by and share your favourite moments from the series!
Manhwa & Manhua News: Check out the new Manhwa and Manhua shout-out (March 2016).
Event News: One Piece Awardshas concluded. Check the results Here!
MangaHelpers > Manga > Browse > Aries
Home
Chapters
Translations
RSS 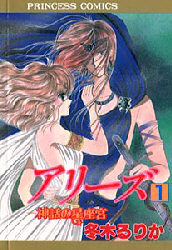 Fuyuki's modern adaptation of Greek mythology about the love between Hades the God of the Underworld and Persephone, the daughter of Demeter. The Greek gods and goddesses now assume human forms but still retain all their vast powers. All except for high school student, Arisa who for some reason is unable to remember her past incarnation as Persephone and her life with Hades who in this present day is her classmate, Amano. But the strength of their joint destinies is so strong that even without those memories, Arisa falls in love with Amano just like Persephone with Hades hundreds of years ago. But this time, Amano is determined that he will not lose Arisa like in the tragic past. He will protect her even if it means going against every immortal being and will not yield her to Zeus who wants to unlock the secret and the mysterious power that Persephone had then and Arisa has now.