Like us on Facebook, follow us on Twitter! Check out our new tumblr page. :)
Manga News: Toriko has come to an end; but be sure to swing by and share your favourite moments from the series!
Manhwa & Manhua News: Check out the new Manhwa and Manhua shout-out (March 2016).
Event News: One Piece Awardshas concluded. Check the results Here!
MangaHelpers > Manga > Browse > Arumi-chan no Gakushuuchou
Home
Chapters
Translations
RSS 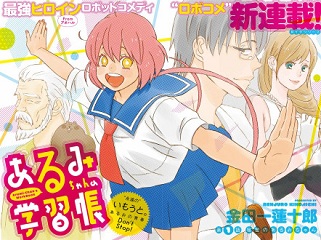 In the future, robots have taken over many simple jobs, leaving many humans jobless. Many people are resentful of robots, and their resentment often bubbles over into violence. At first, this means little to teenage Arumi, who lives with her older brother. Their parents were killed in an accident, and their other living relative is their grandfather. Arumi's older brother has become frightened of the world outside his house and can't even bring himself to step outside without support.

But the truth, which no one knows except Arumi's older brother and her grandfather (not even Arumi herself!), is that Arumi actually died with her parents and the current Arumi is a robot. She was specially commissioned by the original Arumi's grandfather, who claimed his grief was too great with that final loss. She is exactly like a human in every respect, so it has been easy for her to remain secret and live an ordinary teenage life.

After the death of her grandmother, her older brother finally revealed to her the shocking truth. Now Arumi has to consciously hide her identity in order to keep safe from the people who want to trash robots. Not to mention, her older brother wants her to get a part time job to pay for her own maintenance, thus allowing him to continue his shut-in, carefree life. How will Arumi handle this sudden twist in her young life? [tethysdust]