Like us on Facebook, follow us on Twitter! Check out our new tumblr page. :)
Manga News: Toriko has come to an end; but be sure to swing by and share your favourite moments from the series!
Manhwa & Manhua News: Check out the new Manhwa and Manhua shout-out (March 2016).
Event News: One Piece Awardshas concluded. Check the results Here!
MangaHelpers > Manga > Browse > Asa Meshi Mae
Home
Chapters
Translations
RSS 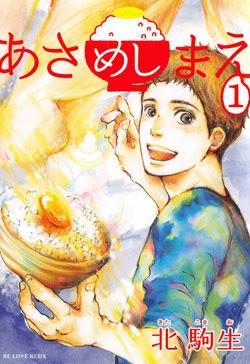 At a difficult time in his childhood, Hidaka Gen was saved by a friendly breakfast restaurant called "Asa Meshi Mae." His experience with that restaurant led him on the path of studying cooking. Years later, when Gen is in his twenties, he returns to "Asa Meshi Mae." The restaurant is now closed, and the owner has passed away. The owner's only daughter, Sayoko, is now a divorced single mother. Gen is determined to re-open "Asa Meshi Mae," the restaurant that has meant so much to his life! [tethysdust]