Like us on Facebook, follow us on Twitter! Check out our new tumblr page. :)
Manga News: Toriko has come to an end; but be sure to swing by and share your favourite moments from the series!
Manhwa & Manhua News: Check out the new Manhwa and Manhua shout-out (March 2016).
Event News: One Piece Awardshas concluded. Check the results Here!
MangaHelpers > Manga > Browse > B.B. Girls
Home
Chapters
Translations
RSS 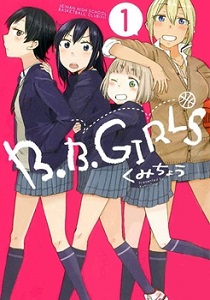 Mishima Isami has never been able to participate in sports or clubs due to her poor health. Now that she's entering high school, she's decided to turn all that around. Her goal, inspired by a popular manga, is to become a member of the girls' basketball club. She may be little, weak, and inexperienced, but she makes up for it with her enthusiasm and stubbornness. After winning over the other girls on the team with her spirit (though not her skills), her basketball life has begun. It's going to be a tough road, since she is still far behind the other girls in terms of ability, but Isami refuses to give up! [tethydust]