Like us on Facebook, follow us on Twitter! Check out our new tumblr page. :)
Manga News: Toriko has come to an end; but be sure to swing by and share your favourite moments from the series!
Manhwa & Manhua News: Check out the new Manhwa and Manhua shout-out (March 2016).
Event News: One Piece Awardshas concluded. Check the results Here!
MangaHelpers > Manga > Browse > Bakugyaku Kazoku
Home
Chapters
Translations
RSS 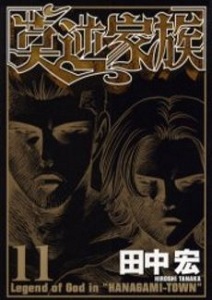 Hino Tetsu was in a gang as a teenager, with his friends Kunio, Kosuke, and Atsushi. Back then, motorcycles, friendship, women, and violence were the most important things in life. Then, Tetsu had a kid with his girl Kiri, and they began to settle down into a different kind of happiness.

Now Tetsu's kid, Shuhei, is 14, and he's got to deal with living under the shadow of his father's gang legacy. His 'uncles', quiet Kunio, who now owns an Italian restaurant, Kosuke, who is still a womanizer, and friendly-seeming Atsushi are a major presence in his life. There's also Atsushi's cute daughter, Makoto, who is about his age. Shuhei wants to do ordinary teenage stuff (like lose his virginity with Makoto), but can he keep from getting caught up in the complications of his parent's past? [tethysdust]