Like us on Facebook, follow us on Twitter! Check out our new tumblr page. :)
Manga News: Toriko has come to an end; but be sure to swing by and share your favourite moments from the series!
Manhwa & Manhua News: Check out the new Manhwa and Manhua shout-out (March 2016).
Event News: One Piece Awardshas concluded. Check the results Here!
MangaHelpers > Manga > Browse > Bin ~Sonshi Iden~
Home
Chapters
Translations
RSS 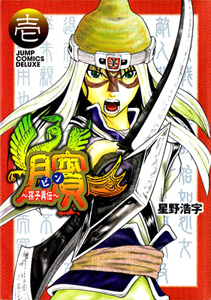 Many military leaders throughout history, including Napoleon, have been found using the teachings in the ancient Chinese literature called the Sonshi. The Sonshi, written by the leader of the Son family, extensively covers topics ranging from troop movement to forging alliances. Bin is a young adult in 360BC who is a criminal and social outcast. His face was tattooed with an unmistakable mark that will prevent him from ever working a decent job and his knee caps were cut off so that he will never walk again. He is the fifth generation of the Sons and he is said to be just as cunning as the original writer of the Sonshi. This story is about Bin, a legendary military tactician that changed the history of China. [vyc]