Like us on Facebook, follow us on Twitter! Check out our new tumblr page. :)
Manga News: Toriko has come to an end; but be sure to swing by and share your favourite moments from the series!
Manhwa & Manhua News: Check out the new Manhwa and Manhua shout-out (March 2016).
Event News: One Piece Awardshas concluded. Check the results Here!
MangaHelpers > Manga > Browse > Black Sun Doreiou
Home
Chapters
Translations
Forums
RSS 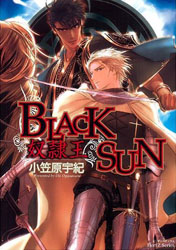 Gerun Fortress, under the command of stand-in officer Leonard de Limbourg, is attacked by the prestigious general Jemaru Jan of the Middle Eastern Empire. With no hope of winning, Leonard hopes to negotiate with Jemaru, offering his head in exchange for the safety of any survivors left in the fortress. But instead of killing him, Jemaru takes the beautiful knight as his prisoner and spoils of war. Forced to sleep with a man that is both his enemy and his weakness, Leonard's feelings of shame overtake his heart, but lust overtakes his body...

Bliss scanlation group had scanned and translated the first volume, and have since dropped the manga as 801 Media licensed it.

Chinese raws are found here, and please tell us your group name so the translaters and typesetters can acknowledge you! http://www.hrcomic.com/comicinfo/7257/