Like us on Facebook, follow us on Twitter! Check out our new tumblr page. :)
Manga News: Toriko has come to an end; but be sure to swing by and share your favourite moments from the series!
Manhwa & Manhua News: Check out the new Manhwa and Manhua shout-out (March 2016).
Event News: One Piece Awardshas concluded. Check the results Here!
MangaHelpers > Manga > Browse > Blood Hound
Home
Chapters
Translations
RSS 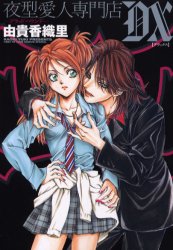 Rion is on a mission to find her missing friend Shihoko. Her only two clues are a card given to her by Shihoko and a confession that her best friend was in love with a vampire. Thus she heads down to a club filled with pretty male escorts whom she insists are vampires. Suou, the owner of the club, insists that he doesn't know a Shihoko at all and claims that they are not vampires. So, he decides to chase her out of the club. In order to obtain the truth, Rion throws a very, very expensive bottle of wine onto the ground to prove that she is not leaving, for now she has to work part-time at the club. Later, she realizes that Suou and gang are not the vampires that kidnapped Shihoko. However, in the nick of life and death for both Shihoko and Rion, another group of vampires comes along to save them. So, who are the real vampires now?